Look at the TRENDS

Consumers are looking for more than a permissible indulgence

Growing concern about sugar has led to a slowdown in the global confectionery market, but there are pockets of faster growth, including in functional confectionery, as consumers look for more than a permissible indulgence – a sweet treat that delivers a real health benefit.

Consumers have long sought foods and drinks that provide a balance between health and indulgence, but it is only in recent years that confectionery manufacturers have attempted to persuade mainstream consumers that their products have the potential to deliver on both. And in mature confectionery markets, like Europe or North America, functional products can still carve out a sizeable niche.

The antioxidants in cacao have attracted a lot of attention in particular, as researchers have explored their potential role in cardiovascular, digestive and skin health, as well as anti-inflammatory effects. Manufacturers looking to play up the purported health benefits of chocolate have used a variety of tactics, such as pairing dark chocolate with other healthy ingredients, such as nuts and fruit, or linking health with other attributes associated with premium products, such as organic, single origin or Fairtrade sourcing. In addition, sugar content has been pushed down, while cocoa content has been pushed up.

Euromonitor International has predicted a 3.5% rise in sales of dark chocolate over the five years to 2021, compared to 2.3% in regular chocolate, citing health concerns as well as an overall trend toward premiumisation.

Meanwhile, pastilles, wine gums and boiled sweets are being used in both the nutraceutical and pharmaceutical industries to deliver ingredients like vitamins, minerals, fibres and fish oils, to soothe sore throats, or to deliver other dietary supplements. Companies like Rousselot and Baker Perkins are switched on to the trend, providing ingredients and processes that help manufacturers deliver such compounds in a reliable and appealing way, with accurate dosing and minimal degradation. 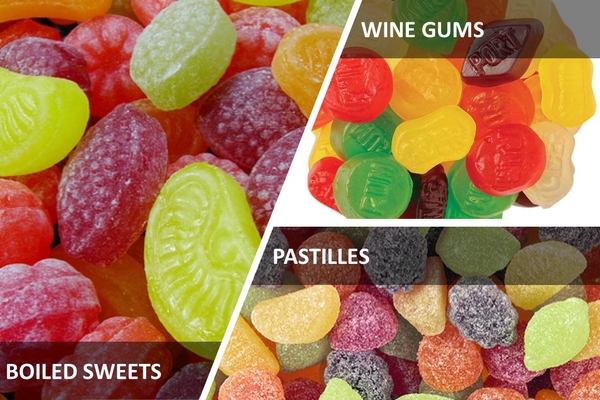 Sugar-free chewing gum with ingredients like xylitol for improved oral health is one of the most successful segments of the functional confectionery market, accounting for more than half of all global sales (53%) in 2015, according to figures from Euromonitor International. But apart from in this category, consumers still expect confectionery to contain sugar, meaning there is plenty of space for functional products that are high in sugar. In China, where sugar confectionery still outsells sugar-free, functional confectionery is growing at a much faster pace than in Europe or North America, reaching double digit growth in 2015 (10%), compared to around 3%.

Still, while there is growing demand for added health-boosting ingredients in confectionery, manufacturers must bear in mind that most consumers eat too much sugar. The World Health Organization’s latest recommendation is to limit sugar consumption to less than 5% of daily calories, but only about ten countries in the world have average sugar intakes at or below this level. In addition, many confectionery products marketed as healthy options are still relatively high in calories, meaning that most people should limit their consumption.